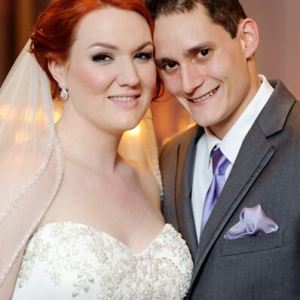 Jas and I just got married. Like just, not even two months yet. Which I suppose means that we are still newlyweds. I’m not sure many newlyweds spend their first couple months married separated, with one holed up in the hospital and the other at home with a toddler. But, this is our current reality.

We weren’t married or engaged when we had Buds, though people naturally assumed that we were and would always refer to Jason as my husband. After we did get engaged, the only time I ever used the word fiancé was when I was doing wedding stuff, for some reason it just sounded so weird, so snooty. Since being here I have easily said and heard the word husband 7000 times. It’s weird to refer to him as my husband as we’ve been through so much together prior to our now six-week marriage.

We had planned on taking a honeymoon right after Christmas, but things happened, and here I am. So, no honeymoon, unless you count this time apart as our honeymoon, which he may in fact do. After living together and having a child together, it’s so strange to be completely separated when we should be celebrating our new adventure together. Once the twins are born, our relationship will shift again, as it naturally does when children are involved, which means we will have even less time for just the two of us, but will be embarking on a whole new way of life together. We both wanted a big family, and now we will have one.

Besides, a one year anniversary may just be the perfect time for a honeymoon.