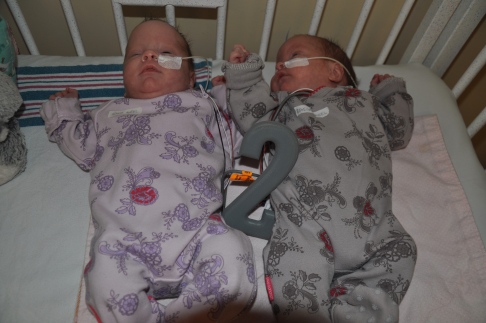 Two months! I can’t believe we’re already into March (despite the massive amounts of snow still on the ground) and how much my girls have grown. Sometimes it feels like only yesterday that the girls were born and we got to meet them, and other times it feels like so long ago. Two months of major ups and downs and getting to see my girls grow stronger and more beautiful every day.

Raegan is getting close to six pounds, coming in at 5 pounds, 14 ounces, and Ella is already six and a half pounds. It’s getting harder to hold them together as they’re running out of room, but no worries, they just shove each other out of the way. 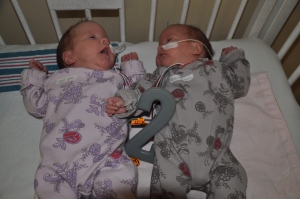 I’m definitely feeling tired. I’ve heard from several people that the end can be a hard time because going home seems so close yet so far.The girls are pretty much just working on feeding right now. There’s a bunch of criteria that they have to meet before they can go home, and feeding is one of them. Their tubes have to be gone and they have to be completely feeding by boob or bottle. I’ve decided that we should really focus on bottle feeding as the girls will be on bottles at home. I can’t even see myself having time to pump in addition to taking care of three kids, so I have to be practical, knowing that my milk supply isn’t up to snuff.

I never knew that having a preemie would effect so much, like feeding. Raegan is doing well, I fed her a whole bottle this afternoon which she pretty much gulped down like it was the best tasting formula in the world. Every now and then she sputters, but she gets better with every feed and is learning how to breathe and eat at the same time. Ella is having a bit of a harder time, though she too has good feeds and bad. Last night, I was giving her a bottle and she had a bad spell where her heartrate dropped extremely low and she stopped breathing. Unable to come back up on her own, she had to be given oxygen. It was probably only seconds, but felt like hours, and scared the crap out of me. 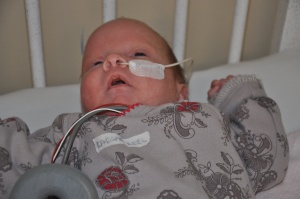 One of the nurses told me today that we might end up staying an extra two weeks or so past their due date if they can’t get the feeding down. That means at least another month, which is so hard to imagine. Jas and I are installing the car seats next week and the girls’ room is pretty much ready, minus the prettying parts. I really just want them home with us, no matter how terrified we are.

The girls are seeing a physiotherapist at the hospital who has already given them exercises to build some muscular strength. The faces they make as I pull in their ab muscles are pretty equivalent to the faces I make when trying to exercise more than going back to the kitchen for more snacks. 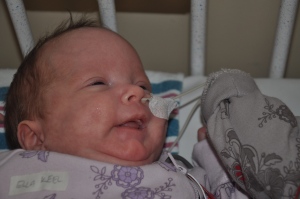 Unfortunately, Raegan seems to be a night owl. Ella is unsure if she prefers days or nights, so is trying out both. Raegan tends to be sleepy during the day then up for hours at night. So yay? While we want them to have more wakeful periods, I would prefer if those hours were between 10 AM and 4 PM, thank you very much!