Once when out with the kids, I turned to my friend and motioned towards the kids, saying, “And THIS is why I’m so exhausted.” Her response was, “How could anyone not expect you to be exhausted?” I suppose it’s true, most parents walk around like exhausted zombies, constantly complaining about whatever stage their kids are in; infancy, teething, terrible twos, threenager. Or we’ve been kept up late or had our sleep interrupted for sick babies, bum changes, nightmares, or their favourite stuffy has slipped all of half an inch from their grasp.

Ella has the right idea this morning…

I also realize that when in a family with two parents being exhausted, a family with just one parent can expect even more exhaustion. My coworker describes it as respite care; when one parent is physically or emotionally done, they can tap in the second for a breather before losing their shit, but when there’s only one mama outnumbered by three hooligans, the exhaustion seems never-ending. Sometimes, I wonder why I’m so exhausted when I didn’t do anything- except keep three tiny humans and myself alive. 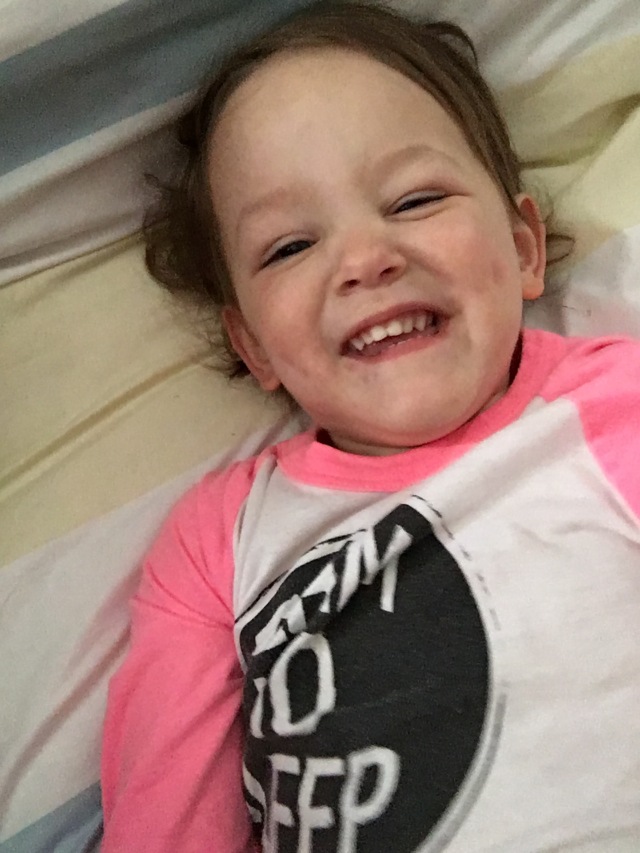 Today, I found the exhaustion was seeping into my bones more than usual, perhaps thanks to the unwelcome snow and hail we received? Yet, after dinner, the kids went on this hugging spree where they kept asking each other for hugs and giggling profusely at each other. Then we sat and read a story with apt awe and attention before moving onto counting penguins before the kids headed to bed.

Earlier, I found myself wondering about the terrible twos and what I dub the fearsome fours, and how Braeden never really experienced the terrible twos but has embraced being a threenager and now a fearsome four year old, but what luck that I have daughters who do seem to fall into the terrible twos as well. I easily fell into a thought process of how shitty that is, but then watching them reminded me why this kind of exhaustion is the best kind. These three hooligans keep me up, make me slightly crazy, and exhaust me beyond limits, but also have given my life so much meaning, purpose, and love.

And yes, many sleepless nights. Sigh.

Braeden and Raegan hug it out

3 thoughts on “Tales from the exhausted mama”