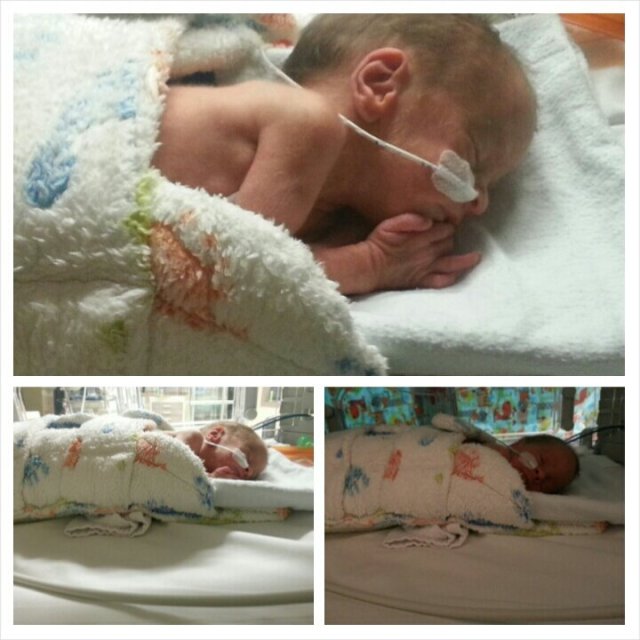 What a week it’s been! When I think about how hard the first week was especially on Ella, I am beyond amazed by how well my girls are doing.

That day I walked into the girls’ room and saw that all the machines were gone, I could have jumped for joy, if people wouldn’t have thought I was crazy. It was actually the girls themselves who showed the team how well they were doing. Raegan pulled her oxygen mask off after getting frustrated with it and Ella pulled out her oxygen tube from her nose because she was also fed up.

Both girls are back to their birth weights, Raegan now starting to gain weight as her milk is being fortified and Ella lost weight which was all her puffiness. The girls are starting to look more and more alike, which is easier to tell without all the tubes.

I have also started to cuddle with both girls at once which is amazing and strange; two little heads and two little bodies wrapped around me! Ella especially has calmed down so much with the cuddles, not having nearly as many freak outs and both girls are just generally happier and calmer after the kangaroo holds.

The girls have affectionately been referred to as Houdinis by the nurses as both have crept out of their snugglies in the incubator and wiggled into a complete new area. I think we have our hands full with these girls!

The nurses are constantly telling me how amazed they are by Ella’s progress which makes me hopeful that her brain damage will also heal as she is such a fighter.

Can’t wait for the adventures the girls have in store for me this week!