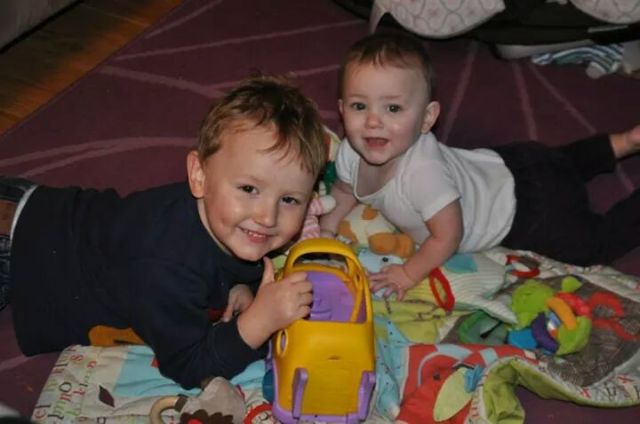 After the girls were first born, whenever we asked Braeden the names of his sisters he was always quick to yell Ella! but often needed help remembering Raegan’s name. At first, I thought it was because her name is a little harder to say, but since it’s so similar to his, I wondered if it was just because we talked about Ella more.

I have loved watching Braeden turn into a big brother and getting used to his new role. I think it’s hilarious when he asks about the girls or helps me feed them.

Lately, Buds has wanted the girls to do more than hang around.

“Sisters, want to play with me?” has become his go-to question when he gets home from school. With Ella still having limited movements,  Raegan has become his buddy. He gets on the floor with her and they push cars and trains around. When she tries to grab his hair or his face, he giggles.

I can foresee the two of them causing trouble, but I can also see them being really close. The girls are both lucky to have such an awesome big brother who can teach them a million things, especially how to laugh and have fun.